I read this article in a parenting newsletter recently and was actually impressed with its useful advice. However, there were two things that bothered me about it: firstly it states that probiotics strengthen your immune system, which isn't actually true, although it does boost the immunity of your intestinal mucosa, so it is somewhat true. But then it also had a blatantly false statement saying that anti-oxidants scavenge viruses and bacteria. 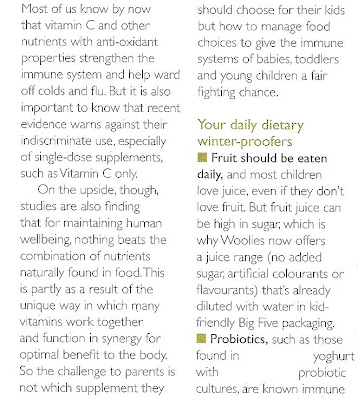 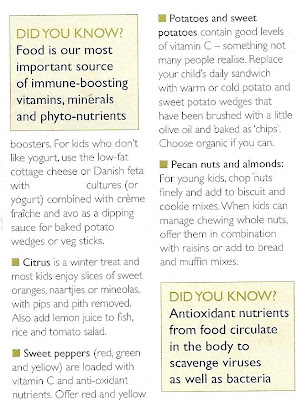 I decided to write to the editor. I didn't mention the probiotics statement because I thought there was an element of truth in it, but I pointed out that the antioxidants statement was completely false and that although antioxidants do infact help your body fight viruses and bacteria by scavenging free radicals and thereby strengthening the immune system, they do not directy fight viruses and bacteria. I thought this was important because perhaps the next time Jane public's kid has a bacterial infection she might think it's ok to only give the kid some anti-oxidants. Which may not be the brightest thing to do, but it illustrates how misinformation can be dangerous, especially in today's media hungry, self diagnostic world.

The editor forwarded my letter to the dietician who sent me a direct response:

Thank you for your comments. Indeed, this is a good example of what can so easily happen and the dilemma with which we are often faced when having to try to translate complex and often detailed explanations into simple language whilst having a limited number of characters at our disposal. For example, consumer research has shown that even a concept such as 'FREE RADICAL ' is poorly understood - let alone oxidate damage, reactive oxygen species etc.

I am certainly very aware that anti-oxidants in fact are involved in the complex processes relating to free radical damage associated with oxidative processes, that some do not necessarily posess anti-oxidant status (e.g. zinc) but are important in inherent defence mechanisms and that the link is not necessarily directly between the anti-oxidant and the bacteria/virus. However, in the spirit of the article and trying to make the point that food remains vital to enhance health - rather than supplements, I have tried to simplify the complexities associated with anti-oxidant functioning, colds and flue and the potential and role nutrients have and play in preventing disease. In addition, our editorial team had to cut text again and in the process of this, another bit of vital info got lost.

You are therefore 100 % correct in your assessment that this statement is not 100 % correct - thank you for bringing this to our attention.

I feel she was trying to justify telling an untruth for the greater good - although in this case it was actually a lie - and I'm not sure if that is justifiable. I think that as medical professionals we are obligated to hold ourselves to higher standards.

Am with you there. How is the baby going?