There's never a dull moment when you have a 1 year old son.

My son is always exploring. He also likes to pretend clean :) (his dad says he gets that from me. hehehe). He especially likes the laundry basket. He'll pick up the clothes his dad leaves lying on the floor and throw them in the basket (my heart swells with pride). Sometimes he climbs into the basket. If it's too full, he'll throw some clothes out and then climb in (but he puts them back in when he gets out). One day he was playing with the laundry basket again. I went through to the lounge. He came in after a while and to my horror, was wearing a pair of my panties on his head!

I've learned that whenever he's quiet, he's up to no good, but I usually only detect the silence after some time. Today he went quiet for a while. When I realised it, I went to check what he was up to. Everything seemed to be in order. Later, however, I noticed that the lounge seemed to have been redecorated. I had my suspicions. He had been throwing things from our balcony lately, so I went out to check. Now, because we live in South Africa, we, like most South Africans, have barbed wire on our property to keep potential burglers out. The bottom story of our house is a store room and we have a wild garden, so there's no fence, so we have barbed wire between the top and bottom stories. My son however obviously decided the barbed wire was a bit drab because he decided to redocorate it with the scatter cushions from our couch. 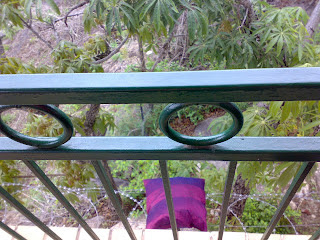 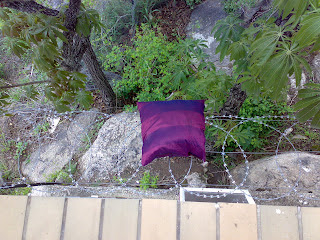 Posted by amanzimtoti at 6:35 AM

Toddlers are fun, aren't they.

I do however have some good and bad news for you. The bad is that this toddler stage disappears so quickly. It seems that it is only a wink of the eye and then that toddler is logging onto Facebook.

The good news is that before you can wink that eye again that toddler has toddlers of his/her own and the fun starts all over again.

Enjoy your little one.

Arnold, you and my dad share a name! And he's also a very proud granddad.

ur description makes me look forward to the day i have my own 1-yr-old. never mind the cries in the middle of the night, etc. (or so i think) :P


enjoying your blog thus far. keep it up :) your boyfriend's one isn't any less interesting.